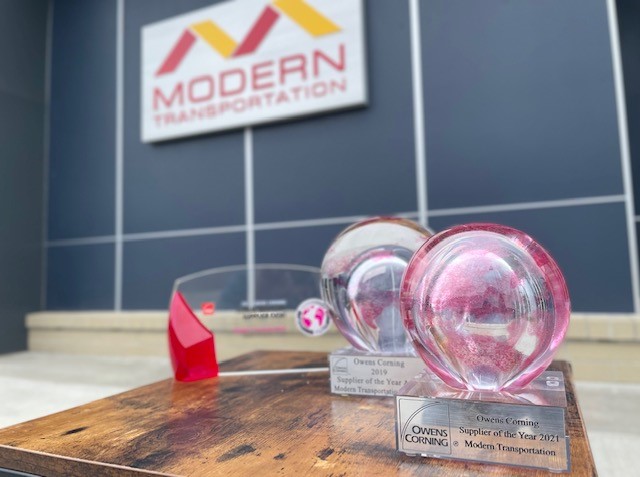 There’s no place like (a new) home. Modern’s Corporate office is moving in 2021! 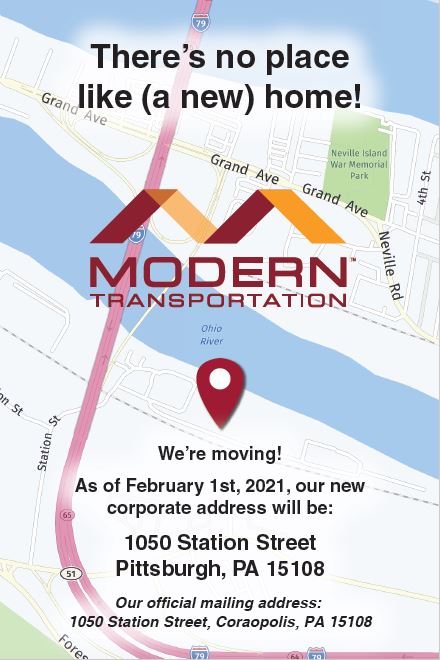 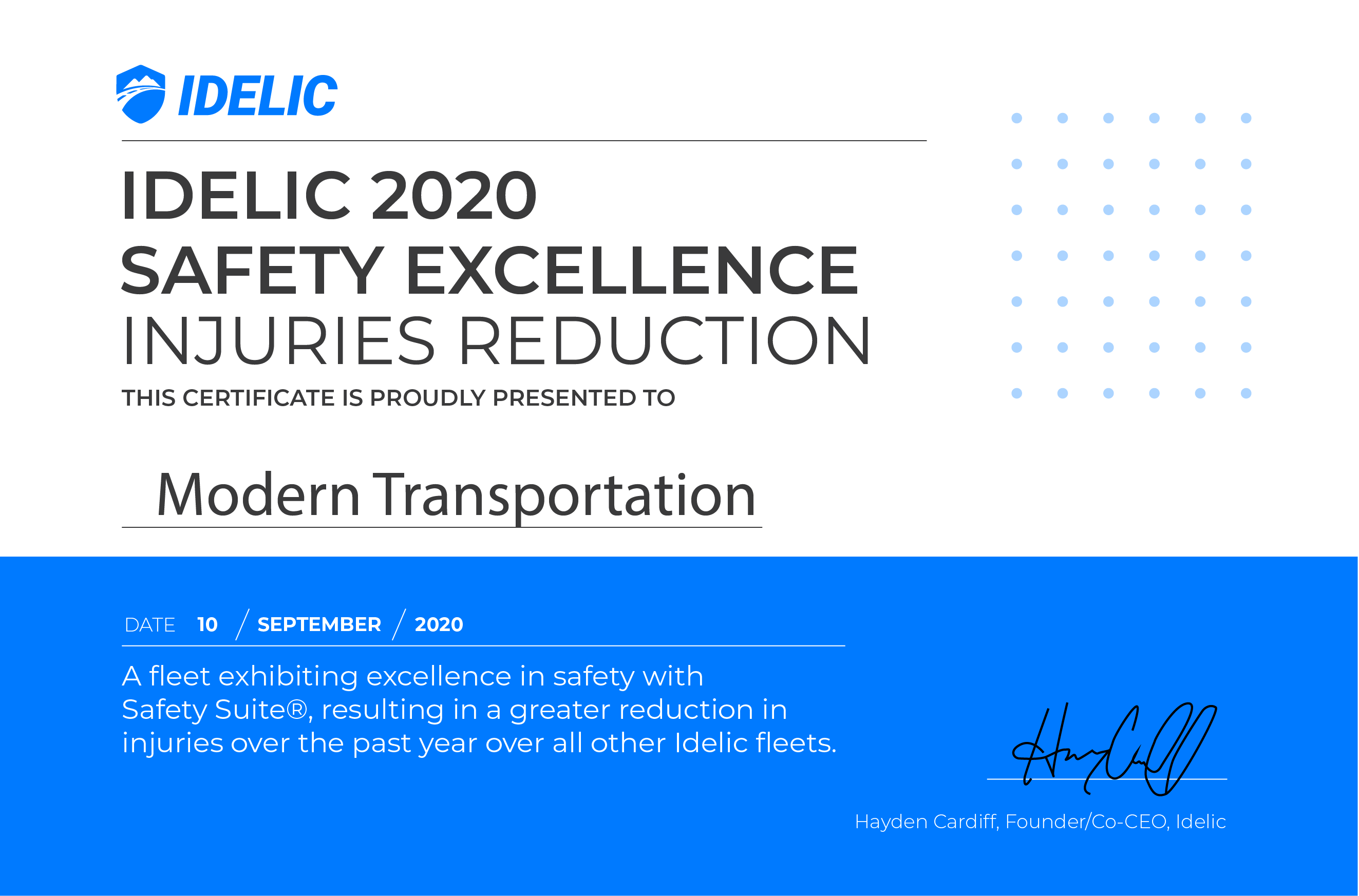 Pittsburgh, PA, September 10, 2020 – Modern Transportation is pleased to share that they have recently been selected for Idelic’s 2020 Extra Mile Award!  Presented by Hayden Cardiff, Founder and CEO of Idelic, this year’s award was announced during Idelic’s Fleet Safety Conference, virtually on September 10, 2020. This year is the first year they have awarded this award to any fleet, and is awarded to a fleet who holds safety to the highest standard and is using Idelic’s Safety Suite tool to be among the safest fleets on the road.

Modern Transportation has been utilizing Idelic’s Safety Suite tool for over a year now. From the time they began using this feature, the company’s average injury count recorded has dropped by 8.7%, which is very significant compared to previous years.

“We are thrilled to be a long-standing partner with Idelic. Their innovative Safety Suite has helped us to greatly improve our company’s overall safety goals by analyzing our drivers’ performance to proactively predict and prevent crashes. We are proud and honored to accept this prestigious award,” said Patrick Cozzens, President of Modern Transportation. 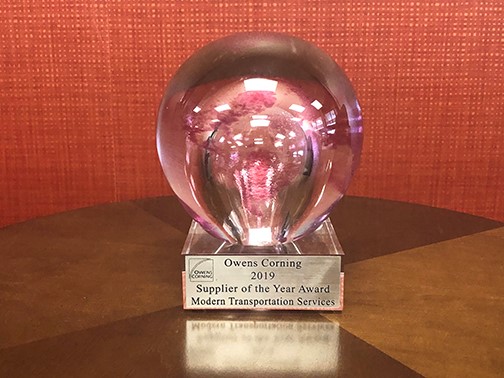 Toledo, OH, September 25, 2019 – Modern Transportation is pleased to share that they have recently been selected as the recipient of the Owens Corning Global Supplier Award for 2019.  To be nominated for the Global Supplier Award, suppliers are evaluated by Owens Corning using six behaviors dimensions, throughout the year: Safety, Sustainability, Innovation, Value Creation, Risk Mitigation, and Spirit of Partnership. These behaviors when demonstrated by the supplier reinforce their relationship with Owens Corning and drive positive results for their customers. Presented by Owens Corning Vice President of Strategic Sourcing, Brad Lazorka, this year’s award was announced during an awards ceremony held at Valentine Theatre in Toledo, Ohio on September 25, 2019. END_OF_DOCUMENT_TOKEN_TO_BE_REPLACED 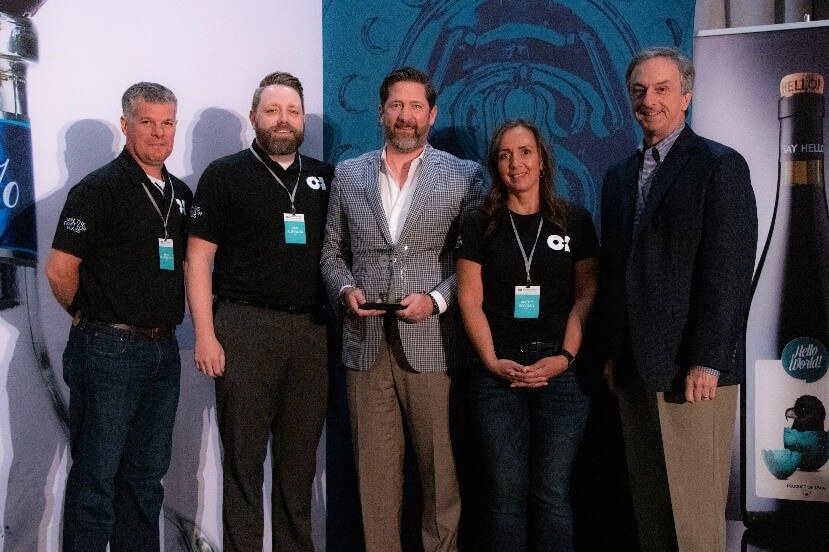 Toledo, OH, June 6, 2019 — We are pleased to share that we have recently been selected as one of two recipients of Owens-Illinois’ (O-I) Supplier Collaboration Award for 2019!  Presented by O-I’s Inbound Logistics Procurement Specialist, Dan Rutkowski, this year’s award was announced during a gala held at Owens-Illinois’ World Headquarters in Toledo, Ohio on June 4, 2019.

“The criteria for this award is the amount and the quality of collaboration between the carrier and our supplier team”, shared Mr. Rutkowski during the ceremony.  “Modern consistently brings new opportunities to the table to provide results”, he continues.  “And examples of those results are all over O-I’s network.”

Mr. Rutkowski went on to share a specific and recent example of collaboration that occurred between Modern and Owens-Illinois’ Waco, Texas plant.   “The process was difficult and sometimes painful”, shared Rutkowski, “but Modern’s constant communication on a day in, day out basis provided O-I with the opportunity to operate through a difficult position.”  During the presentation, Mr. Rutkowski also singled out the dedication and diligence of Modern’s Regional Operations Director, Jamond Hackley.

On hand to receive the award for Modern were Patrick Cozzens, President of Modern Transportation and Modern’s Director, National Accounts, Brian Wilt.

Safety-centric leader selected as “Entrepreneur of the Year” Award Recipient

SEWICKLEY, PA (PRWEB) July 19, 2017
Basing a career on the mantra “Doing the right thing is always the right thing” may sound unrealistic. After all, being laser-focused on safety, caring deeply for your people, and all the while growing a company in the midst of mounting regulations and an ever-shrinking driver pool sounds like an impossible dream. For the President of Modern Transportation, Patrick Cozzens, it’s a dream well worth chasing. “When we get every load delivered without incident and every driver home safely, we consider that day a success”. END_OF_DOCUMENT_TOKEN_TO_BE_REPLACED

Modern Transportation, a carrier that has become synonymous with their mantra “Home Safe Tonight!”, has taken the next step toward their quest to eliminate collisions and enhance the safety of America’s highways. After months of research, Modern has selected the Lytx DriveCam® Program to begin the installation of inward and outward facing cameras in each of their power units. END_OF_DOCUMENT_TOKEN_TO_BE_REPLACED

In its December 2016 edition, Bulk Transporter’s cover and feature article revisits the humble beginnings and points to the impending growth of this mid-sized liquid chemical and dry bulk carrier. Penned by industry veteran writer, BT’s Charles E. Wilson, the article entitled “Growth Potential” shares keen insight into Modern’s inception and strategy for the near future.

“Like most people who have put their heart and soul into a company, my team and I are pleased to have Modern serve as the feature article for such a respected industry information source”, notes Modern’s President, Patrick Cozzens. “We love telling our story and when it captures the attention of Bulk Transporter and our peer companies, it helps us realize we are doing the right things.”

In his article, Wilson not only covered the humble beginnings of a 1987 transload opportunity near Butler, Pennsylvania, but also painted a current picture of Modern’s impressive growth. Further, he shared current data relative to Modern’s fleet, while also pointing to the stringent driver selection process of a company who makes no bones about their top priority… getting everyone “Home Safe Tonight!” Finally, Wilson outlined Modern’s business entering into full-service tractor lease agreements,
while purchasing trailers from top trailer manufacturers as the recipe for long-term success!

Modern Transportation has been selected by Commercial Carrier Journal as one of the leading companies in the for-hire trucking industry. Founded in 1987, Modern has been strategically positioned as one of the safest and most reliable bulk transportation carriers in the raw materials and chemical logistics sector.

END_OF_DOCUMENT_TOKEN_TO_BE_REPLACED

Modern Transportation is enhancing their internal corporate leadership with strategic moves designed to accommodate their significant and further impending growth in the dry bulk and liquid chemical transportation sector.

Jeff Null, previously Modern’s Regional Director of Operations – Western Region has accepted a promotion to Senior Director of Operations. Mr. Null’s new responsibilities will include the day-to-day operation of Modern’s twenty-three terminal network, through the leadership of two Regional Directors of Operations who will report directly to him. Since joining Modern in October 2015 following an accomplished seventeen-year tenure with FedEx Freight, Mr. Null has served from his home state of Texas. His new position will require him to relocate to the greater Pittsburgh area, as he will operate from Modern’s Corporate Office in the northern suburb of Sewickley.